Again, I apologize for not posting lately. I am definitely one of those people who is easily distracted. I did take my own advice and go whale watching again and I am SO glad I did. We found a huge pod of humpbacks on one trip… I stayed on the boat for two trips in a row (thank you Sub Sea Tours!) for a total of about 7 hours. We were stampeded several times as they and the accompanying sea lions chased their bait — they went right under the boat and rocked us with their wakes. Incredible!

My latest trip was a bust for humpbacks (in case I haven’t mentioned – my FAVORITE cetacean). However, we soon found out why when a sea lion began swimming frantically around and under the boat — orcas, killer whales, blackfish!

We followed the two transient Bigg’s Orcas for over an hour. I snapped many pictures and a few actually made their way into the local newspaper and onto a news broadcast. One of the top cetacean researchers here in California was able to identify at least one of the whales from the photos. At one point, the killers even slid upside down along the boat – almost close enough to touch. What an amazing sight.

As for my art, I’ve filled up another half of a sketch book with more imaginations and have been working on a few commissions. With that and the whole “back to school” deal, I just haven’t done much else. I did make and play with a gelatin plate – very interesting. I will be playing more with that and posting if anything turns out “shareable.” I also did a quick study from my sketch “Jorge and his owls.” See below. 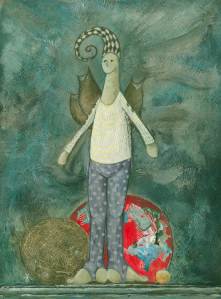 Jorge and his owls, original acrylic painting by Aprille Lipton